Latest update ….. which means I can’t think of a title!

As I’m now stuck indoors, bored out of my brain, waiting for the man to come and service Ray’s wheelchair, I thought I may as well go back to this which I started a few days ago …….

But first I must comment on what happened with my last post. You may recall that that was the one after I met Davina McCall.

Well I tweeted her about my blog and she retweeted it, with a comment!

And, even more amazingly, Davina McCall is now following ME on Twitter (which means I need to think of interesting things to say!!!

And then we go back to the ordinary stuff!

So there I was sat on the sofa, trying to decide whether to put the ice pack on my hand, the front of my knee or the back of my knee! At that moment the hand had possession!

The day had started early with my second ‘functional exercise’ physio class. They are good. About 6 of us with a physio and assistant doing a circuit. More difficult than the arthritis class and, whilst I’m not sure it will help my Baker’s Cyst the balance stuff is good for the M.S. 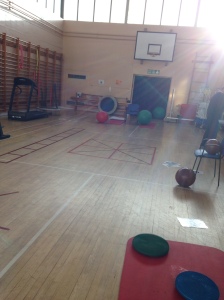 I had a chat with the physio and now know that I must not jump or run (I’d sort of worked that out for myself after I’d tried it) but squats and lunges can be tried. She did say that the size of the cyst and the fact that I can feel it filling up when I do stuff may indicate surgery. Time will tell – I’ll enjoy the classes in the meantime.

Talking of enjoying things, I’m loving my upper body strength program. If you remember one of the targets I set myself was to up my PBs and I’ve done that in the chest press – gone from the 14 to 16 kg dumbbells and I’ve done 3 reps with the 18 kg ones. Unsurprisingly this is my favourite program at the moment. I love the expressions on my face in these, the shock of how heavy they are followed by the effort of pushing them! 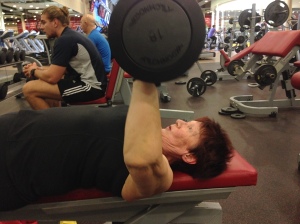 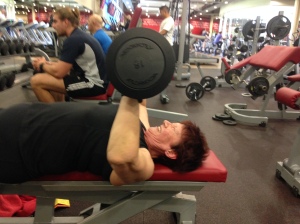 Came home with the plan of grabbing my stuff and going to the gym but Ray wanted a shower and I needed to use the steam cleaner in a couple of rooms (the joys of being a carer).

Housework is not my forte and somehow I managed to point the detail (strongest) jet at my left hand and fire it straight between my fingers. This is not a good idea and it hurts!

At that point I stopped writing! I carried on moving my ice pack about, used the ibuprofen cream, swallowed the co-codamol tablets and ……. went to boot camp 😀.

Enjoyed the class even though the not jumping and not running got me coming up with some rather strange ways of doing things!

Today was another early start because I was training with Darryl. I now have different (additional) areas that ache! Whereas boot camp is obviously class based, personal training really is that and we had a brilliant session and my shoulders and arms are really feeling it. Back to boot camp in the morning!

After training I went to my sister in law’s as she was doing my hair. We were talking about my catalogue of injuries and she took a photo of the back of my knees so I could see what was happening. I’ve tried to do this myself in the past and it’s really difficult, try it yourself. Ray can’t help because he can only use his left hand, try taking a photo with an iPhone or iPad with just your left hand, not easy!
Anyway, as always, I digress.

Now these photos are not pretty, carrying all that weight around for years does not lead to shapely pins, although they are strong! I’ve debated wheter to post it because it’s horrid but decided I have to stick with my honesty theme

If you look at the back of the left knee you can see a large swollen square area, that’s the cyst. It’s uncomfortable rather than painful. It feels a bit like I’ve got a golf ball strapped behind my knee. But I find it interesting to see what it looks like! 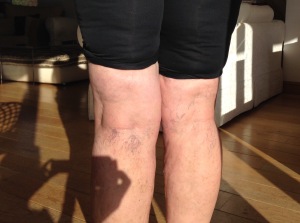 It’s strange how I’m refusing to let this stop me doing anything, when, for the first 55 years of my life I looked for any excuse to get out of any form of physical activity.

My mum was trained as a secondary school PE teacher, she refused a job at the school I attended on the grounds of the rows we would have. Hardly surprising when I brought home one school report for PE which said “No comment as Gillian has not taken part all year due to a verruca.” Hmm, well it worked for a year!

Saturday I went to bootcamp and did double boxing, I love boxing!!!!!

Sunday I went to the gym and did my assisted pull up program (there’s a lot off assistance) and struggled! 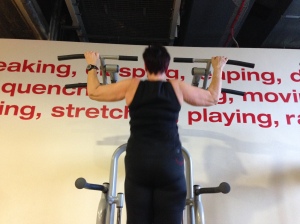 It is now Monday and, after a very long session with the foam roller, the tiger tail and self massage of my arms, delts and traps the aching is finally easing.

I’ve made the decision to go back on detox …… sugar had found its way back into my eating, so I’ll be thumbing through Davina’s book. 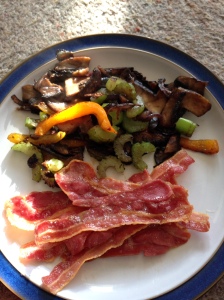