How did you spend Valentine’s Day?

Well it might not be how most people would choose to spend valentines day, and certainly not how most 61 year olds would, but I’ve had a great day!

It started early with a really good workout at Boot Camp at Club One Hundred. Loads of upper body resistance stuff which I can do despite the dodgy knee!

Then on to support four friends running up “those” steps, much more fun than doing it although if my knees allowed …….. after the number of times I did them a couple of years ago I’d still be reluctant! 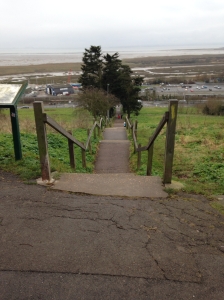 Quick shower at the gym and coffee with my sister in law (who I could not tell my plans for the evening to!) before going home, feeding Ray and getting ready to go out.

So, why the secrecy? What clandestine affair did I have planned?

I was off to meet up with Search Dogs Essex to do my first night time mispering (acting as a missing person) in the forest.

I really did not know how I was going to react to being on my own in the forest at night waiting for the dogs and their handlers to find me. I thought I’d be fine and dud not find the idea scary but, until you do something, you never know, so I decided to wear my heart rate monitor to give me some objective data.

When I arrived at the meeting point I was given a present :-). I got a goody bag filled with all the essentials a misper may need! A mat to sit on, a poncho in case of rain, hand warmers and a torch! Love it!!! 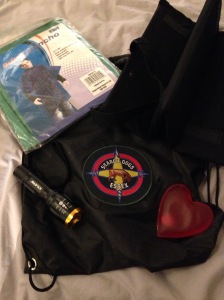 I was told that if I felt concerned, uncomfortable or too cold I should radio in and they’d get me then off we set to be put in our hiding places.

I was cursing the rain last night and I was right to do so. There was serious mud! We walked, slithered, slipped, waded and walked some more. Amazingly I did not fall over, although it was close a couple of times. Have a look at the state of my boots when I arrived at my ‘home’! 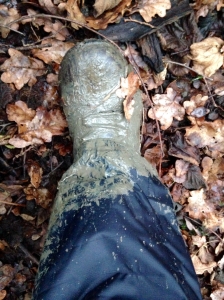 And my really cheap boots did not leak, well done Go Outdoors!!

So, time to settle in. It was still light so I could get a good picture of ‘home’. 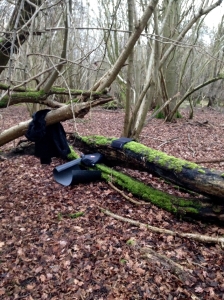 This is the area I was in 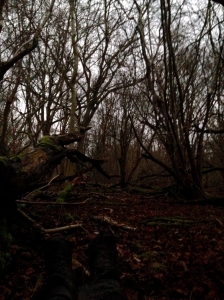 And the view from my position, lying down behind the fallen tree. 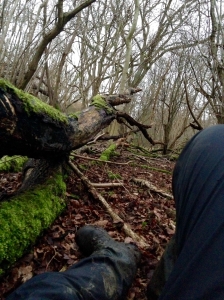 Time to settle down and wait.

I felt quite safe and relaxed in my position. I’d been told there might be deer, and other animals, about but I was nestled into the tree on one side and there were loads of other trees, branches and undergrowth all around so I wasn’t concerned.

I lay on my back and started to switch off. I was quite keen to use the time to try and meditate. I’m not particularly good at that but did well in the woods with the dogs last week so thought I’d try again.

I was doing so well that when they called me on the radio to say they were starting I really jumped, I’d been drifting right off!

There I lay, quite comfortably, drifting away ………. then I heard the bell on the first dog’s harness jingling in the distance. It got closer, and closer, skidded round me, jumped over me and kicked mud in my eye!!! He shot off, was gone a while, then returned. I was ready this time and had pulled my hood round my face!

He then went and got his handler and they returned to me. I was found 🙂

After they’d checked that I was happy to stay (too right I was, I was really relaxed) they said they’d leave me out for the other two dogs to find and they set off to find misper 2. 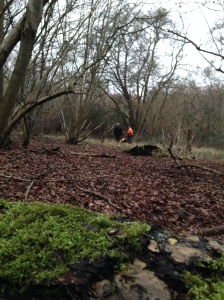 I settled down to wait.

While I was lying there, looking up at the sky, I decided to try and visualise a place and focus on that. One or two of you may recognise this photo I’d seen recently and, looking at it now, I have to say I was getting it pretty well! 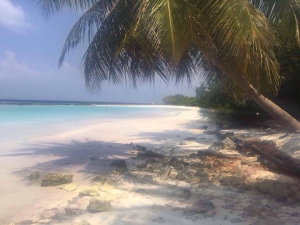 I drifted off again ……. then saw some lights bouncing off the trees. It was quite dark by then as this photo of the sky shows. Sadly my iPhone does not pick up the hundreds of starts that I could see. 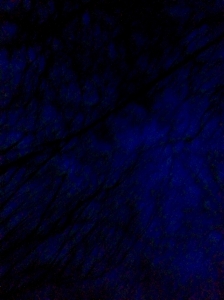 Then I started to hear the bell as the dog got closer …… came right up to me, had a good look and set off to bring his handler to ‘save’ me! 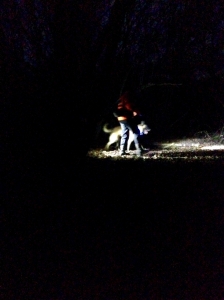 I tried to settle down again and head back to the beach but realised I was getting very cold and had ‘lost’ my fingers. Glovesoff and flash on for a quick photo 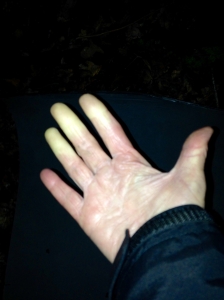 As you can see, there was no blood in my fingers. This is not unusual so it didn’t bother me much but I decided to get up and move about a bit to get the blood moving again. I ended up doing press ups on the tree trunk …… you know how your mother warned you about the nutter in the woods ……..

Back down on the ground. The sunny beach had deserted me and was replaced by a snow hole! 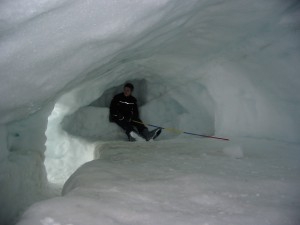 Again I settled down into complete relaxation until I began shivering. I then saw the lights moving about and sat up watching then imagining I was an escaped prisoner of war hiding from them. Yes I have got a good imagination!

On hearing the bell I lay back on the ground waiting for the dog.

At this point I started to get the giggles as I realised I was getting very muddy and that I’d probably be wearing the same coat when I go to a do with the Queen and the Duke of Edinburgh in a few weeks time (yes, I’ll tell you about that later …..) and that they would both probably completely approve!!!!

Time to leave my home, I’d been there for a couple of hours but it didn’t feel anywhere near that long.

I then followed the dog and handler while they found misper 2. Fascinating to watch. The dogs are so clever and the bond between them and their handler is so close.

Misper 2 found and we headed back to the carpark, fortunately a slightly less muddy way and I did accept a steadying hand at the bridges.

One slightly dodgy moment where my boots got stuck in some deep mud, I started to go …. then engaged the core and saved myself.

I tried to explain how much I was enjoying this and the pleasure I was getting from wandering around the muddy woods being caught up in low branches, slipping and sliding about. Moments like that really show me how far I’ve travelled from the walking sticks and blue badge!

Before we left I stayed with the cars whilst the others did a couple of short finds with the last dog.

I stood in the clearing looking at the hundreds of stars and felt completely relaxed. I was right when I thought that I’d be fine doing this, and the heart rate monitor supported that! 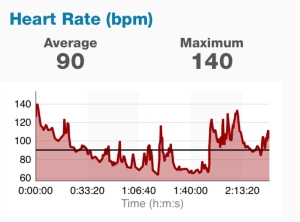 We washed the mud off our boots, then time to go home.

Oh …. and the mud from lying down? See for yourselves! 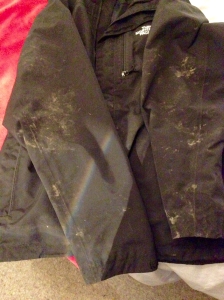 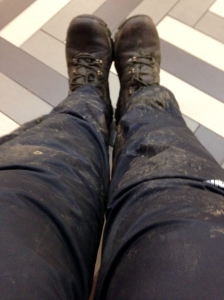 Thanks again Search Dogs Essex, looking forward to the next time!

2 responses to “How did you spend Valentine’s Day?”