Remember that stone, no not Darryl, that other stone that destroyed me in a way that personal training, no matter how good, has never managed to do? 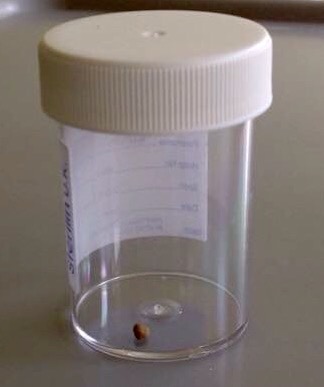 (Very quick recap, in September I was suddenly in horrendous pain, admitted to hospital and, after a couple of nights of serious painkillers I got rid of it.)

Well, one down, but there were still two more, larger ones, lurking about and I want rid!

Having had an outpatients appointment with my consultant I was put on the waiting list for surgery and, quicker than I expected, my turn arrived.

I was originally scheduled to be operated on on 11/12/15. When the appointment came through I checked my diary, the Club One Hundred party was the next night. Although disappointed I decided that it was more important to get the stones sorted but then I found out that the First Aid training for ESAR (Essex Search & Rescue) was that weekend and missing that would delay my going ‘live’ so I rang to see if I could postpone my op.

Spoke to a very nice lady who said that was fine but that it would be next year unless, short little laugh, I wanted it done on New Year’s Eve? I think she was somewhat taken aback when I said that actually that would suit me down to the ground! (Ever since Ray came out of hospital in 1989 we have stayed in on New Year’s Eve and I usually have to wake him up to say Happy New Year so this could be quite an exciting alternative! I’ve spent a Christmas in hospital with him, now I’ll see how they do New Year!)

So I was able to go to the First Aid training which included loading people into stretchers which could be winched up by helicopters (obviously I’m going for the most dramatic bit!)

And then on to the Club One Hundred party which was a great evening! 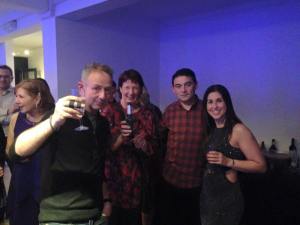 Yesterday I went for my pre-op assessment. Now I’ve managed to avoid having any surgery before so this is going to be another first for me! I was told to report to Basildon Hospital at 1pm and to allow up to 3 hours for my visit. I resigned myself to the idea that most of that time would be spent sat around waiting to see people. I could not have been more wrong!

I arrived on time, met by a very cheerful, friendly lady in her Christmas outfit and was given the necessary stuff to provide a urine sample! Very shortly after that a friendly nurse called me in.

She explained what would happen, got me to provide my contact details, any dietary requirements (I felt asking for ancestral food may be taking the ****) and then took my height, weight, blood pressure, temperature and then I had an ECG, more about that later!

Back into the hallway, phone out to check Facebook and ……. I was immediately called in by the pharmacist who wanted to know my allergies and medication.

Well apparently that’s a very unusual answer! Think I made his day.

I showed him the supplements I take, carry on with the Vitamin D, Zinc and Magnesium but stop the Fish Oil as it can thin your blood.

Back out and a short wait in the corridor where I kept thinking about that ECG, it looked very pretty ……..

Called in by the Sister for a complete barrage of questions. An early one was did I have Alzeheimer’s, not yet ….. Now I know why it was at the start, I wouldn’t have been able to answer the questions!

Although there were what seemed like hundreds of questions they were not asked in a tick box way. She seemed genuinely interested in what was going on (the reality must be that she is bored out of her head asking the same stuff of people all the time) and I was able to ask questions at any point, which of course I did!

“I’ve just had a tetanus jab and I’m due to start a course of Hepatitis B ones, will that be OK?”

So of course she asks why I’m having them and I say it’s because I do voluntary work in a prison and she’s surprised and we talk about that and then she goes to ask someone …….. and I sit and wait, and I think …. about that ECG …..

Back she comes, I’m not to have them two weeks either side of the op so I’ll just leave the vials in the fridge, something to look forward to later!

On with the questions, ooh your blood pressure’s good!

Stunned silence, nobody’s ever asked that before! Why would I want it? “Well I find things like that interesting and I write a blog and ….”

She couldn’t think of any reason why not but said she’d just pop next door to check. She obviously explained what I wanted to do and the other person asked what the ECG was like and was told it was excellent, not sure what was said next but it was followed by loads of laughter – they’ve now met me! 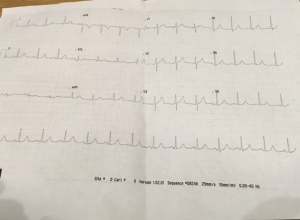 She kindly made me a copy, without my distinguishing details, and I’ve taken a photo!

It appears that, physically at least, I’m in pretty good shape

More questions and I warn her my father had very bad reactions to anaesthetics …. just in case …..

More questions and then we get onto the details of my admission. One blood test now then another a couple of days before the op to confirm my blood group and ‘harvest’ some extra blood in case they need to give me any. What an excellent idea. Because of the M.S. I can no longer be a donor but at least that means that a) they can save other people’s for those that need it and b) people who could but don’t donate have to provide some for themselves!

On the day I can have a light breakfast before 8 am and then only water (that’s easy)  except for a sort of energy drink that I have to mix up until 12 when I arrive at the, I want to say departure lounge but some may think that’s in bad taste!

After that, nothing. I will be taken from there to the op and then put on a ward somewhere, they’ll ring my brother and tell him where!

“Well I’m due to be doing throw line training on the 6th January …….” 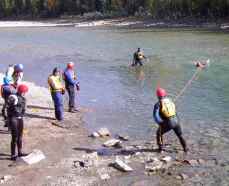 “I’m training to be a member of Search & Rescue!” Obvious really!

“Will I be able to do the 2 day initial search course on the 16th Jan?”

“There’s more chance but you need to remember that kidneys are delicate and that they may bleed …. Ask the Consultant and Anaesthetist when you see them”